As usual, Madge was rummaging around at an estate sale a few months ago and came across a couple of issues of Charm Magazine from the 1940s.  Having never heard of the publication, but bowled over by the ads and editorial, she took the issues home.  After some research Madge discovered this magazine had an important place in the history  of American women.

Charm was a fashion magazine prominent from the 1940s to the early 1960s.  Credit for it’s success was due to Charm’s editor-in-chief Helen Valentine.  Already an innovator as the creator of Seventeen Magazine in 1944, Valentine was ready for a new challenge by 1950.  At Seventeen Magazine, Valentine declared it was time to treat young women as adults.  At Charm, Valentine redoubled that magazine’s new efforts to appeal an emerging demographic – working women.

During World War II women had invaded the workplace and after the war many were staying put but were often not taken seriously.  Valentine set out to change that.  You can see the change in attitude just by the tagline on the magazine.   On my February 1946 Charm cover is “The Magazine for the BG* (Business Girl)”.   By 1950, once Valentine was in charge, Charm became “The Magazine for Women Who Work“.  Girls were now women,  There was no turning back the clock.

The magazine really came into it’s own when Valentine hired Cipe Pineles art director.  Another pioneer in magazine publishing, Pineles started her magazine career at Conde Nast in the 1930s, Pineles worked her way up their fashion ladder through many of their most famous publications including Vogue, House and Garden and Vanity Fair.  She made a name for herself at Glamour, as the first female art director of a major magazine.  Pineles is credited with creating the modern magazine layout with clean fonts and fashion shoots on location.  Pineles worked with Valentine at Seventeen then followed her to Charm.  Pineles remained in design the rest of her life including a long career as a faculty member at the Parsons School of Design.  She died in 1991 at the age of 81.  You can read a more extensive bio of Cipe Pineles here.

Of course Madge particularly loves her issues of Charm Magazine due to it’s extensive use of hats in ads and editorial.  After all no self respecting working woman, or any woman for that matter, would leave the house without wearing a hat.

Together Valentine and Pineles created a powerhouse publication.  Working women now had their own money and needed several types of wardrobes.  Advertisers flocked to Charm.  Through reader surveys Valentine had the pulse of working women and became a successful consultant to manufacturers and retailers.  In fact she is credited with persuading major department stores to stay open longer on Thursday nights so that her readers could shop after work.

One of the most fascinating aspects of Charm was it’s owner, Street & Smith Publications whose main claim to fame was pulp fiction magazines and dime novels.  Certainly an an odd combination of holdings. There’s a fun history of the company here.

In the late 1950s  Street and Smith was purchased by none other than Conde Nast.  They purchased the publisher primarily for it’s Charm Magazine subscribers.    The Street & Smith name lived on in various sports publications including the Sporting News.

By the early 60s Charm Magazine’s run was over when Conde Nast merged the magazine with Glamour.  By then both Helen Valentine and Cipe Pinless had moved on.  But the legacy of Charm was a new attitude that acknowledged the capabilities and individual buying power of women fully 30 years before Ms. Magazine. 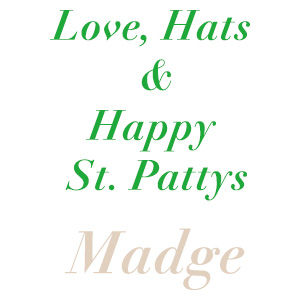 Do you have a favorite look from these fabulous forties fashions?  Post your comments below.