Since starting her vintage business, Madge has made some amazing connections. The one closest to her heart is all her wonderful new friends in the world-wide hat-loving community. A big part of that community is the Mad Hatter Society on Facebook, a very passionate group of milliners and hat collectors. 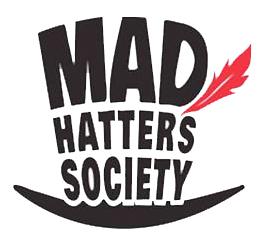 Madge recently caught up with one of those friends, Iris, a retired attorney, and active Chicago Mad Hatter, to talk about her vintage hat collection, part of which has been consigned to Madge’s Hatbox for sale.

Madge: How long have you been collecting hats?

Iris: I bought my first hat in 1974, when I got my first real job. It’s Adolfo, dark brown felt, with a brim and a feather around it as a band. I wore it every day with my camel colored coat, and I still have it, although I haven’t worn it in decades. By the next winter, I’d bought several more hats, also with brims. For many years, I only wore hats with brims. Wearing a hat became my signature – people commented on the hats and noticed if they saw me on a rare occasion when I didn’t happen to be wearing one.

When I buy a hat, it is something that I will wear. I have a number of what I call “go to” hats, very wearable, to don for doing errands or going to the grocery store, as well as all the dressier/crazier ones.

What got you started?

Almost as long as I can remember, I have loved watching old movies, and a major part of that was seeing

the stars in their fabulous clothes and hats. Somehow, I just wanted to wear hats too, although the ones I wore at first were much more tailored in style. My hats have gotten more flamboyant as time went on, although I suppose that wearing hats at all is a bit flamboyant. Certainly it was unusual in the 1970s.

How many hats do you have?

The only way that I keep track of numbers is to keep my hat inventories updated. I have three separate inventories: winter hats, summer hats, and “hard to classify” hats (which includes some cocktail hats, fully feathered hats and a few very unusual ones which could really be worn at any time of

the year). I have recently re-done the inventories, abandoning the idea of keeping each inventory to one page, and thereby allowing the inclusion of more information (where I can remember or otherwise access it)! They are organized by color, and for some colors with a lot of hats, by size as well. The current number is 313, after de-acquisitioning some, which I do twice a year when I’m re-organizing for the seasons.

Do you have a favorite milliner?

If forced to choose only one milliner, it would have to be Lilly Dache. I have 14 of her hats, in varying styles, from late 1930s to 1960s. I also love hats by Raymond Hudd (who I knew personally), Bes Ben, Frank Palma, Laddie Northridge, G. Howard Hodge, John Fredrics and others, not in that order. It seems that I also have an affinity for quite a few New York Creations hats, which were created by a group of milliners, and only occasionally have the milliner’s own label in addition to the tiny blue New York Creations one.

Do you have a favorite style of hat?

From 1974 until late 2003, I had almost entirely hats with brims. I had very few small hats, and at that point my entire collection was much smaller. In late 2003 I went to a vintage store and bought my first vintage hats. From that point, the collection mushroomed to its current level as I have happily collected vintage hats.

the collection. The styles from that era are fabulous, and I can not only fantasize about glamorous movie stars wearing similar hats, but also actually see them in the old movies I watch. It is truly amazing to find hats that are 70 or 80 years old, yet are in wonderful condition and wearable today. I don’t even mind some occasional minor condition issues, which are appropriate to millinery of that age and don’t affect wearability.

My favorite style within that era is the tilt hat, in of course its many variations.

Any advice to budding collectors?

My advice is to buy what you’ll wear, with the knowledge that your tastes and preferences may change with time.  Also, as the collection grows, and you enjoy wearing your hats, you’ll probably get more courageous.  I certainly have!

View the collection for sale at MadgesHatbox

By Madge
This site uses cookies: Find out more.