Madge has an extensive collection of Hats Magazine ranging from the 1950s – 70s.  Hats Magazine, established in 1876, was the trade publication for milliners, hat manufacturers and suppliers.  We’re highlighting a fun issue from 1951 which happened fall on the  75th anniversary of the publication.  It’s filled with stylish toppers, so enjoy these spring hats from 1951.

The stunning cover shot is a platter hat.   The milliner is John Fredrics.  Made for a chignon or updo hairstyle, the back features a cascade of spring blossoms.  In the front is a netted veil.

One of the monthly columns was Gotham Gossip featuring the latest millinery designs from New York City.   This issue featured some of the biggest names at the time including Jack McConnell, Emme, John Fredrics, Laddie Northridge, and William J.  Other prominent designers shown are Beatrice Martin and Eric Braagaard.

William J was the nom de plume of the late Bill Cunningham, who covered New York City fashion from the 1970s until his death in 2016 at age 87.   He chronicled the world of fashion by photographing both street fashion and the famously well-dressed.  His two columns, On the Street” and “Evening Hours”, were must-reads for fashionistas.  Before his career as a photographer, he was a hat maker in the 1950s.  The unique design shown above is described as a harlequin style in bright red straw with black buttons on the top and a front dotted veil.  Not a style for the faint of heart.  Unfortunately very few of his creations still exist.

You could always count on Hats Magazine to feature some fun stylized ads.  Madge really loves this hatbox over the NYC skyline advertising Alfreda Hats, a milliner prominent in the 1940s and 50s.

The American Way solves the quandary of what to wear after Easter and features sketches of upcoming summer designs including capelines and cartwheel hats, bonnets and sailors.

The article notes that many of the hats feature a design of flowers, bows or upturned brims on the back.   From the editor:  “The forward line predominates in all shapes, the silhouette is young, with flattery as it’s the chief goal.”

Take a gander at the extravagant one in the middle from Lilly Dache. We do love the large capelines from Eric Braagaard and Jack McConnell.  Do you have a favorite?

Because milliners and designers submitted their own photos for each issue, the resulting collages were always a fun mix of photographic styles around one theme.  This time it’s symmetrical designs ranging from Lily Dache’s roller to Don Marshall’s Buddha style.  Roller style hats were similar to a Breton and usually sat well above the hairline as shown.  The middle bottom photo features a very chic suit and hat by Elizabeth Arden

Pariscope, The latest from France

Another popular feature was Pariscope, a look at the newest hat designs from France.  The columnist, Renee Freid was a prominent fashion reporter based in Paris who wrote for various publications.  In this issue, she mentions that the current style is toward smaller hats including sailors (again!), caps and bonnets.  The one exception is number nine, a hat described as a Louis XV extravaganza.  Not a fan..

Here’s another ad we love featuring a daisy sisal hat.

The headline says it all.

We love every one of these velvet hats.  What do you think?

Veiled hats were meant to add some mystery and after all who doesn’t like a little mystery? 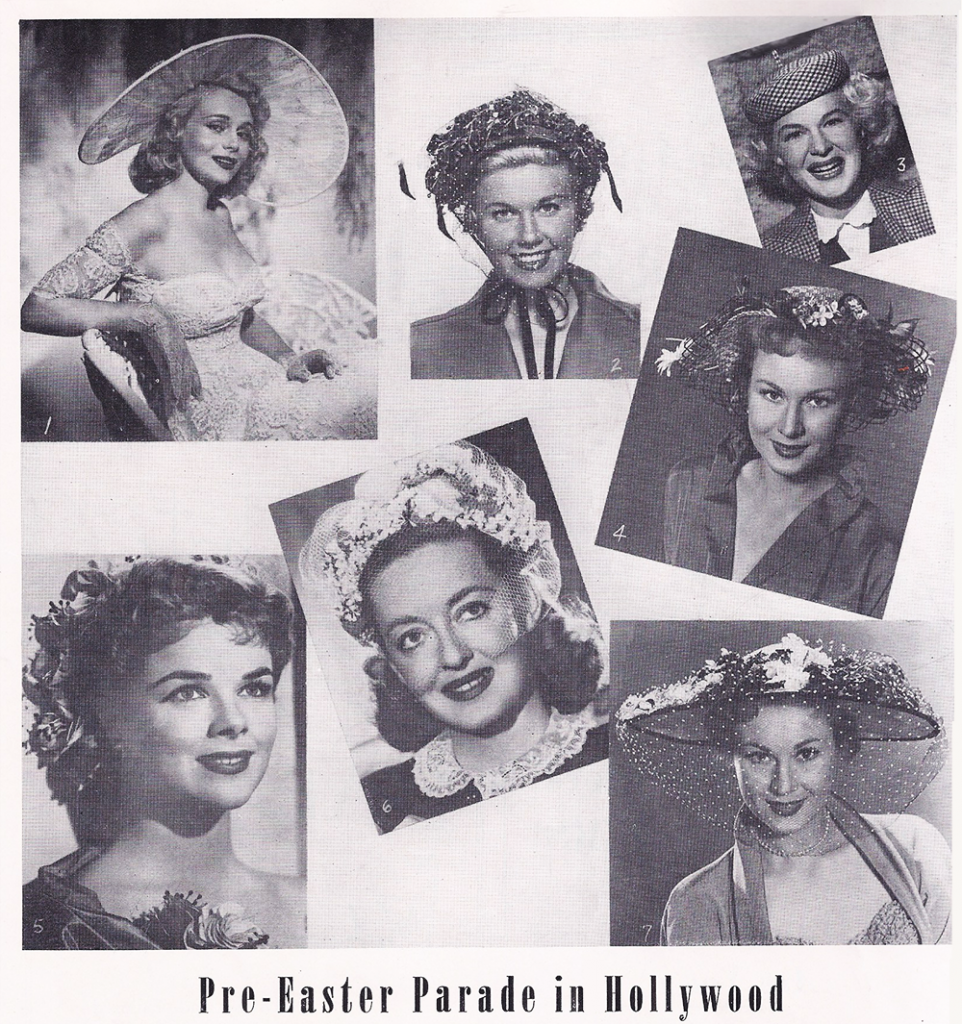 We end with an Easter hat collage direct from Hollywood can you name all of these glamorous stars? **

We hope you have enjoyed this trip through Spring, 1951.

If you are inspired to pick out your own spring chapeau please visit our Spring Collection of Vintage Hats.

We wish you a Happy Easter, meaningful Passover and a stylish spring.

** Clockwise from the upper left-hand corner:  Marie Wilson, Doris Day, Betty Hutton, Virginia Mayo in both 4 and 7, Sally Forrest and Bette Davis in the middle.  Hope you got them all!