With Miss Thelma’s canned goods safely tucked in the back seat, we headed off to the ‘big city’ of DeKalb, county seat of Kemper County, Mississippi.   Our destination?  The Kemper County Historical Museum.   Miss Thelma put in a good word for us since the museum is only open by appointment, .   We were a bit late, having underestimated Miss T’s stamina, but Grace, true to her name, was happy to see us. The museum is located in a small historic grain warehouse formerly owned by members of the Stennis family.   You may recognize this name from one of the more famous members of the clan, John Stennis, a long-time senator from Mississippi, serving from 1947 – 89.

Beautifully restored by the Historical Society, this magnificent building retains the original brick floors and a large wooden warehouse door. Grace gave us a quick tour of everything then let us rummage around (Heaven!) 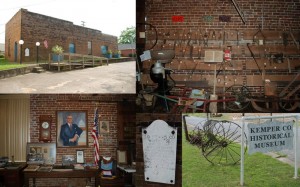 The building is chock-full of memorabilia including a large exhibit on Senator Stennis, plus old photos and exhibits from around the county.  Understandably, most of the material covered DeKalb, but there were a few interesting nuggets from Scooba, including a wonderful high school class photo.

On a table, neatly stacked I spotted a display of books written about the county.  Of course Miss Thelma’s history of Kemper County was front and center.  Surprisingly the county has been fodder for many authors due to its reputation as “Bloody Kemper”.  A name justly earned after the Civil War due to local feuds, political squabbles, and even murders of poor blacks by a local doctor running an insurance scam.

We spied an old rusted file cabinet. Sarah took the top drawers and I took the bottom. There wasn’t much there but we did discover some old photos of the annual Scooba Christmas Parade from the 1960s-80s showing tantalizing bits of the downtown. In the photos some of the buildings are still occupied. As to the rest, their condition wasn’t much better then than now.

After we had done us much as possible at the museum and said our goodbyes and thank yous to Grace, we took a quick stroll around the courthouse square. We checked in at the local library and the county record office still seeking those historic Scooba photos  and once again came up empty.  Why is it that every small town courthouse in every county in the country seems to have lost all the records “when the old courthouse burned down in 1919?”  Sigh.  We did spot one fun tidbit at the library.  On top of a stack of Kemper County Messenger newspapers from 2012 was the last issue of the year with Miss Thelma’s column smack dab in the middle of the front page.  The column announced her retirement from writing for the paper after 20 years.  Well, that retirement lasted about two weeks.

Back in the car, we headed home to Scooba. Sarah had the night shift at the college library so I dropped her off on my way back to Miss Thelma’s, where I met a very frustrated Miss T who had been searching through her records for those elusive downtown photos to no avail. She did find a photo of Thelma Quarles circa 1917 wearing a hat that might have been made by grandmother Madge. It’s a stretch, but I’ll take it.

At Thelma’s we talked some more over some iced tea and Miss T volunteered to show me downtown and a tour of Cedar Lawn Cemetery. As we slowly drove the block, Miss T pointed out each building and what had been in them at one time. Did I mention she has an amazing memory?

We stopped in front of the building where I thought Madge’s shop might have been and she agreed that location was probably correct. I mentioned going to Cedar Lawn Cemetery and seeing an area for Hares but no gravestone for Mae, Madge’s best girlfriend. I did see one for a Beulah Hare Rosenbaum. Miss T looked at me. “Why that is Mae, no one called her Beulah.” Score! We drove on to the cemetery, passing Mae’s old home on the way. It is a very pleasant white house on a corner.

We walked among the graves at Cedar Lawn as Sarah and I had done the day before. In the Hare section a humongous anthill had sprung up overnight on the corner of Beulah’s headstone. I grabbed a bottle of water from the car and washed the stone. One row over was the final resting place of Bernheart Rosenbaum, the future husband, she called Bunny in her letters. 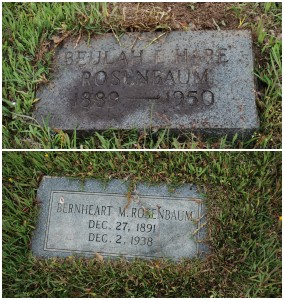 We walked the entire small cemetery as Miss Thelma reminisced. What must it be like to walk through a place where most of your family and life long friends are laid to rest? Miss Thelma paused next to her sister and we snapped a photo. The sun was starting to set so I ran Miss T back home with a profusion of thank yous. What an unforgettable woman. 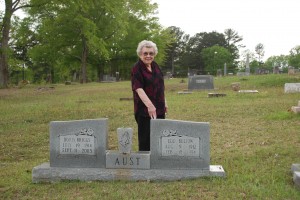 As I headed the car back to Meridian for my final night I took in everything I had done over the last two days in Scooba. The graciousness of her people was overwhelmed me.  I spoke a silent prayer to my grandmother whose own journey had caused me to come here.  I can certainly see why grandmother Madge made such good friends in such a short time.  The possibilities for a town revival are real.

Tomorrow? A morning trip to Mississippi State and then on to the state archives in Jackson.  What would I find there? 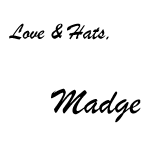