A NYC Christmas Card from Madge.

Madge got a last-minute opportunity to join gal pal Mary in New York City. You may remember her from an earlier madcap adventure to Chanute, Kansas.

Mary’s husband couldn’t make the trip so Madge got to be the plus one. Any opportunity to visit Madge’s favorite city is an adventure not to be missed. And at Christmas with Mary, well that’s a wonderful bonus.

In an earlier post Madge bemoaned the loss of that great American invention, the department store.  But in the Big Apple stores like Bloomingdales, Lord & Taylor and Macy’s still shine, especially at Christmas.

So wishing you the merriest of holiday seasons, here’s Madge’s Christmas card from New York City.

Macy’s, the big kahuna of NYC celebrated the season twice with windows on one side of Herald Square featuring a Peanuts Christmas and on the other, Virginia O’Hanlon, who wrote the famous letter to the New York Sun in 1897 asking if there truly was a Santa Claus.

The main entrance welcomed shoppers with both Snoopy and Virginia. 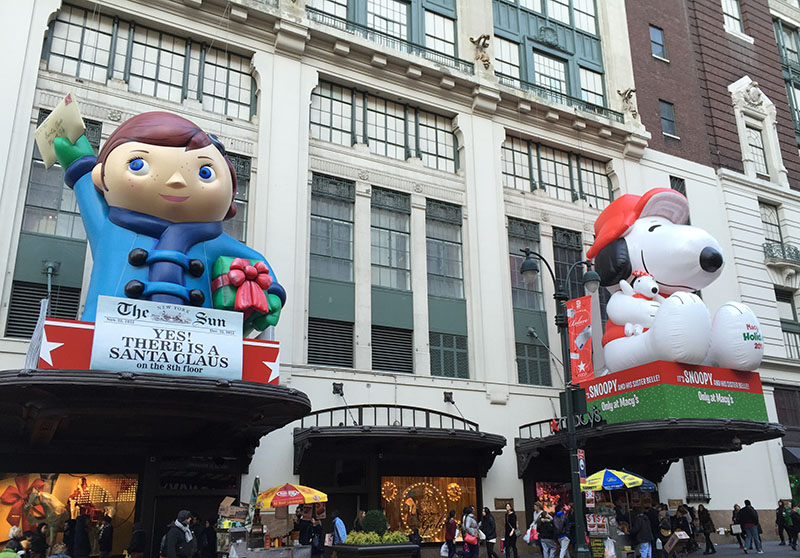 In this window Charlie Brown and Linus are debating his newly purchased Christmas tree as it falls over from the weight of a single ornament.

While next door – Snoopy fights the Red Baron 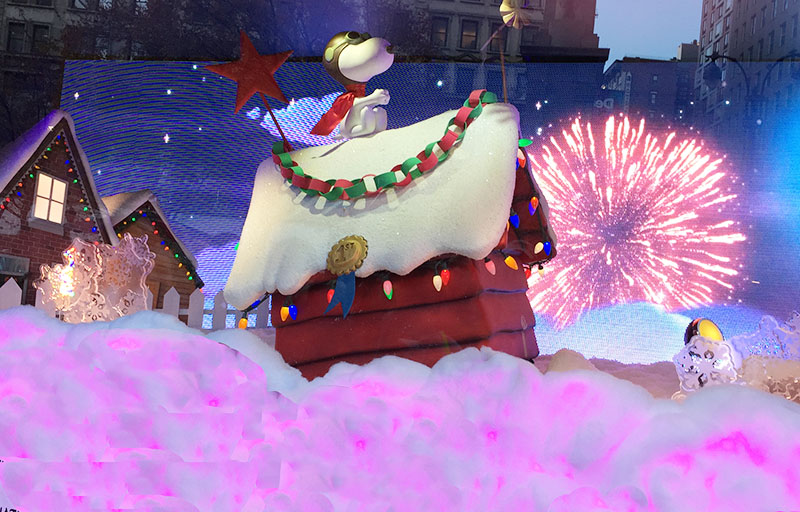 Just inside the main entrance was a beautiful woodland display with animatronic squirrels and a wise old owl.

Lord & Taylor started their festivities with a spectacular sidewalk arbor of lights.

Leading to Christmas goodies in both the edible and wearable varieties. 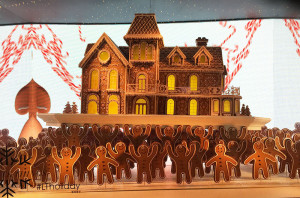 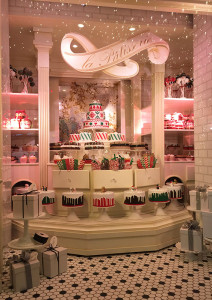 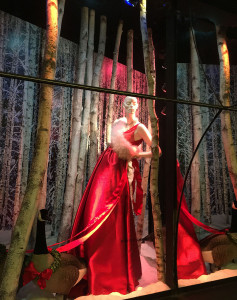 The highlight was an enormous white Cuckoo Clock.

The windows at Bloomingdales were a luscious combination of flowers, bells and mirrored animals.

Here’s a nodding French Bulldog made of gold mirrors. 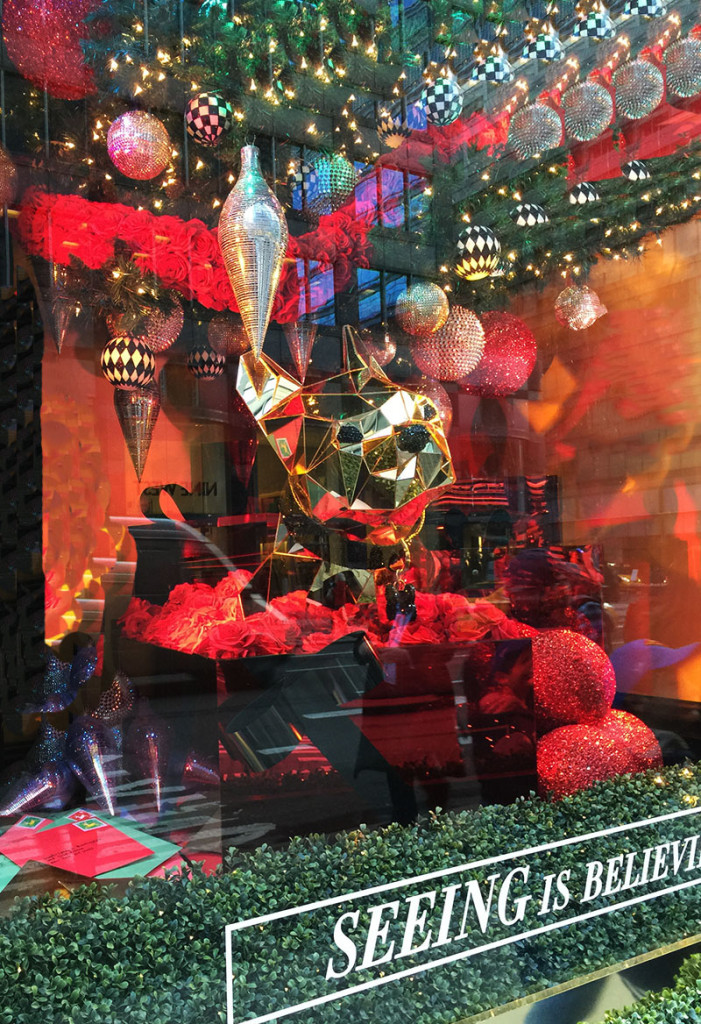 This buck surrounded by red roses just took Madge’s breath away.  If you look closely you can see that his horns are made of Christmas bells. 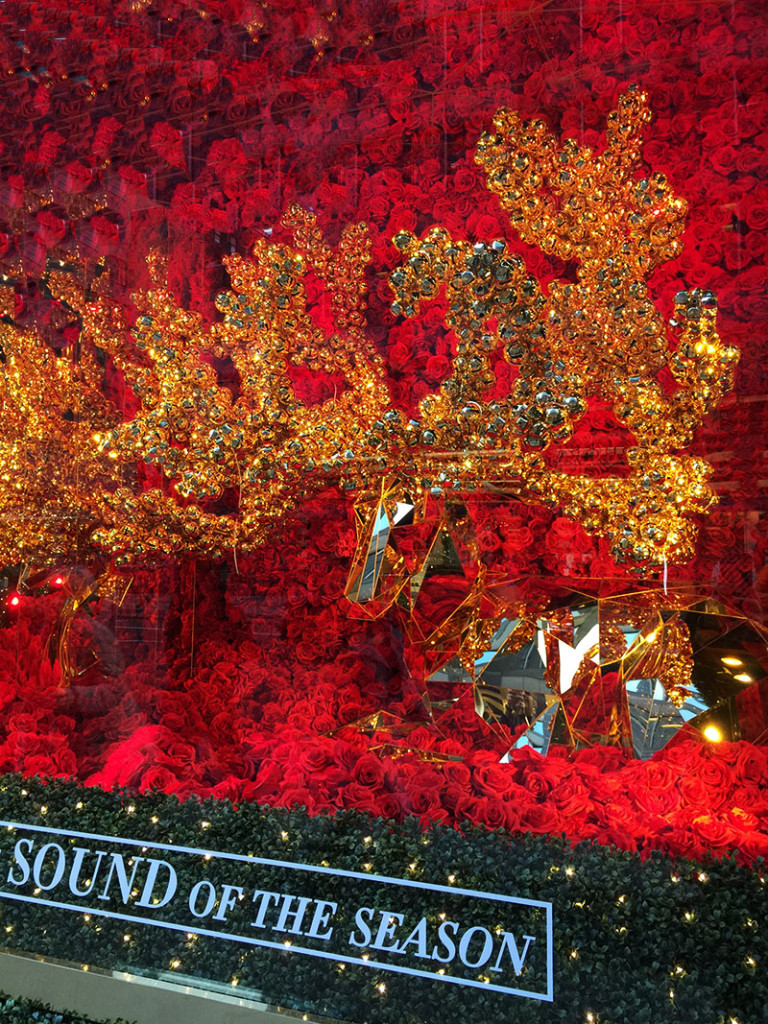 Who doesn’t like a red bear with a lollipop? 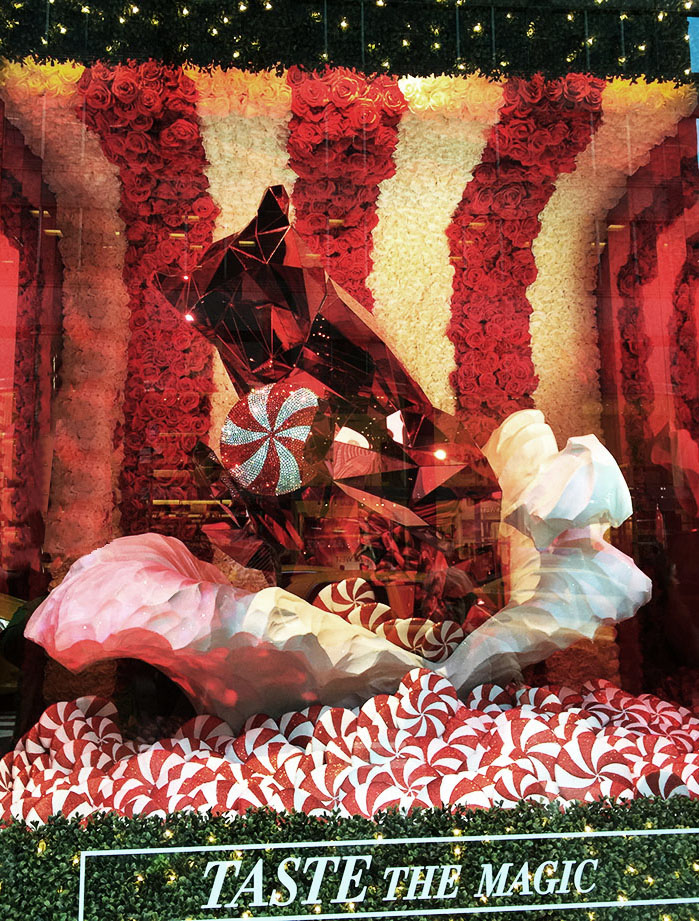 By the way, Bloomies does sell clothes . . . 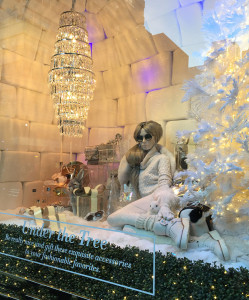 The incredible display by Saks Fifth Avenue, Winter Palace, was a mind-bending combination of futuristic fashion and iconic wonders of the world. 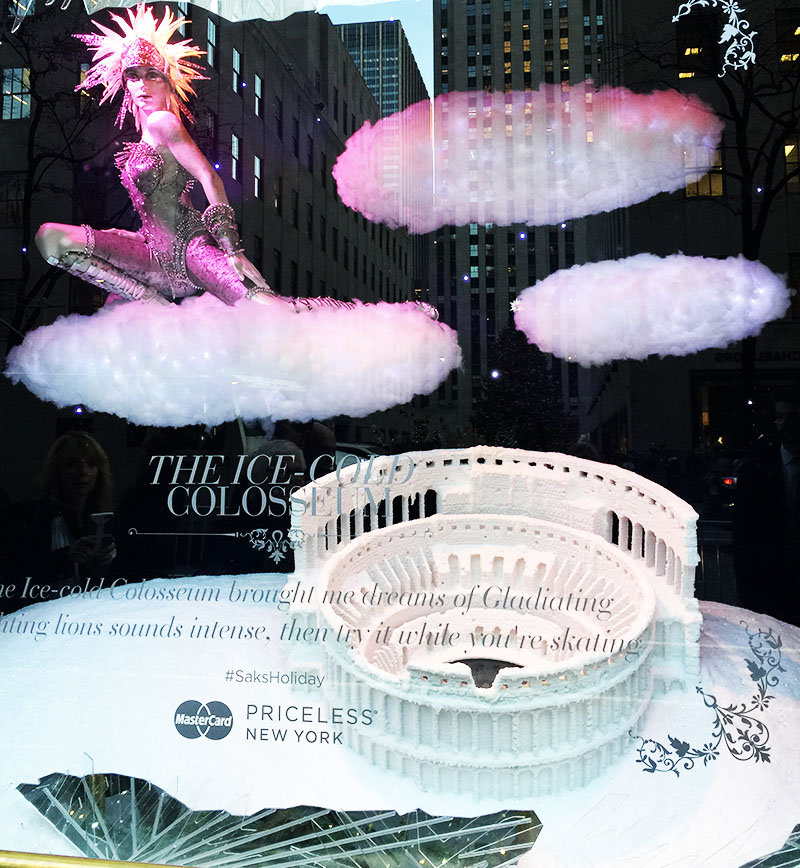 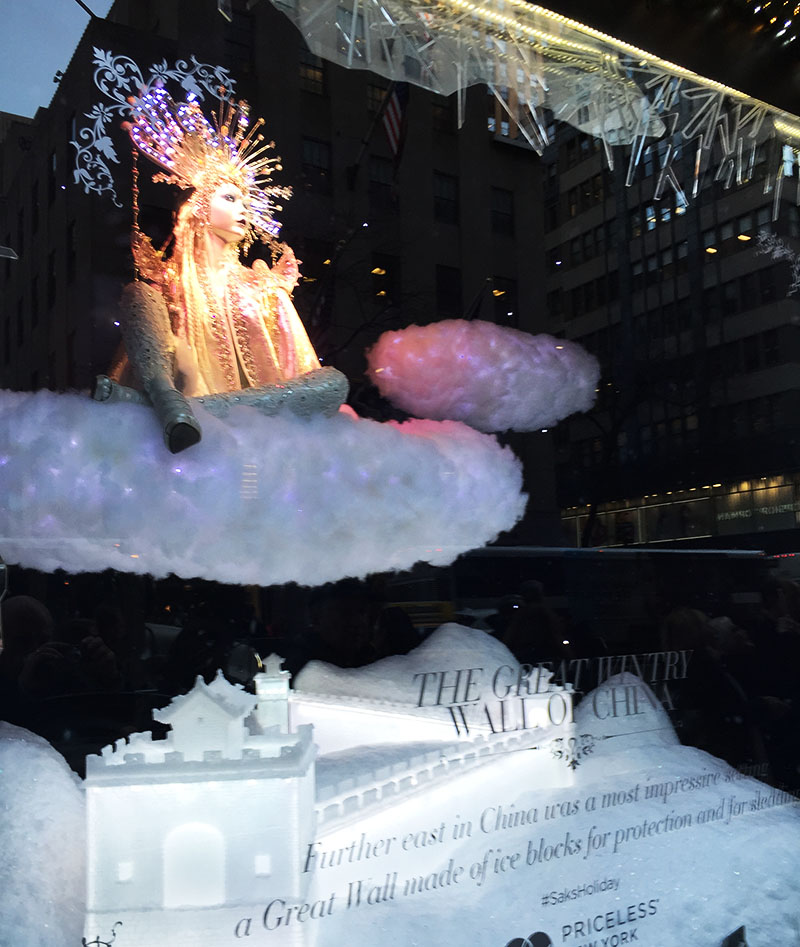 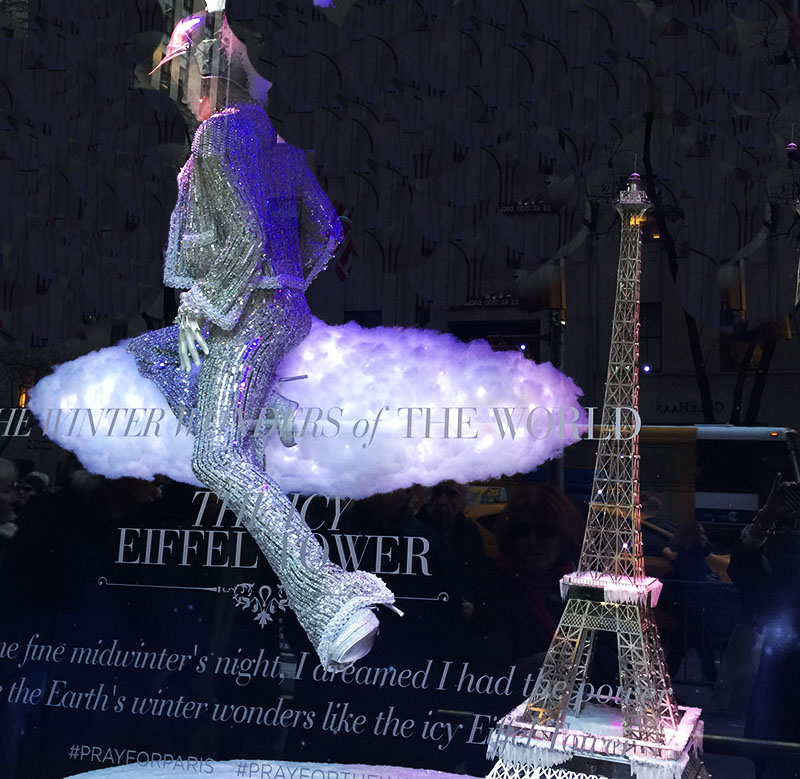 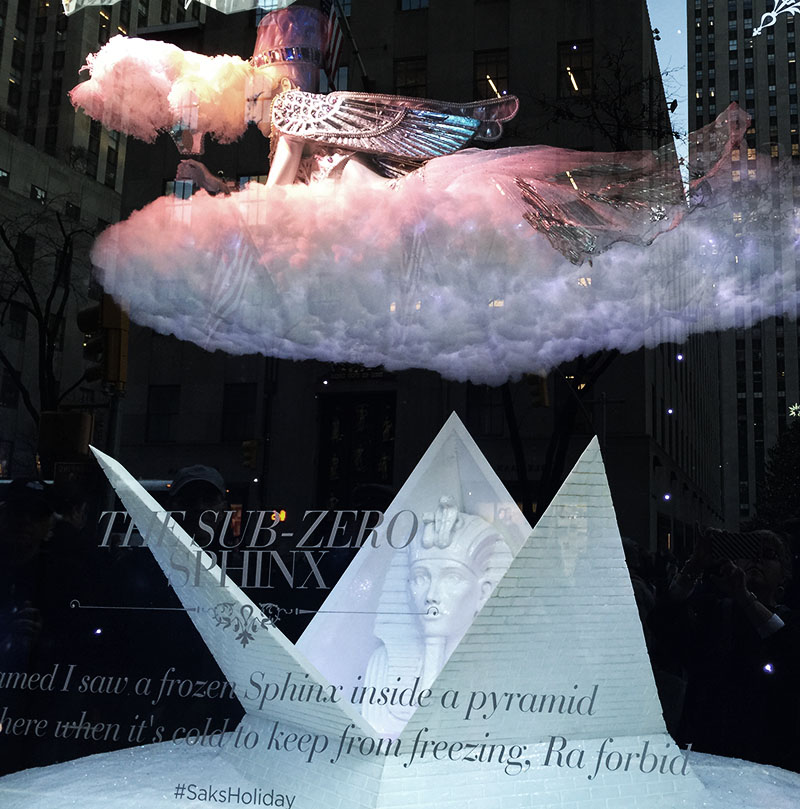 Of course, a Madge Christmas card from New York City wouldn’t be complete without Rockefeller Center. 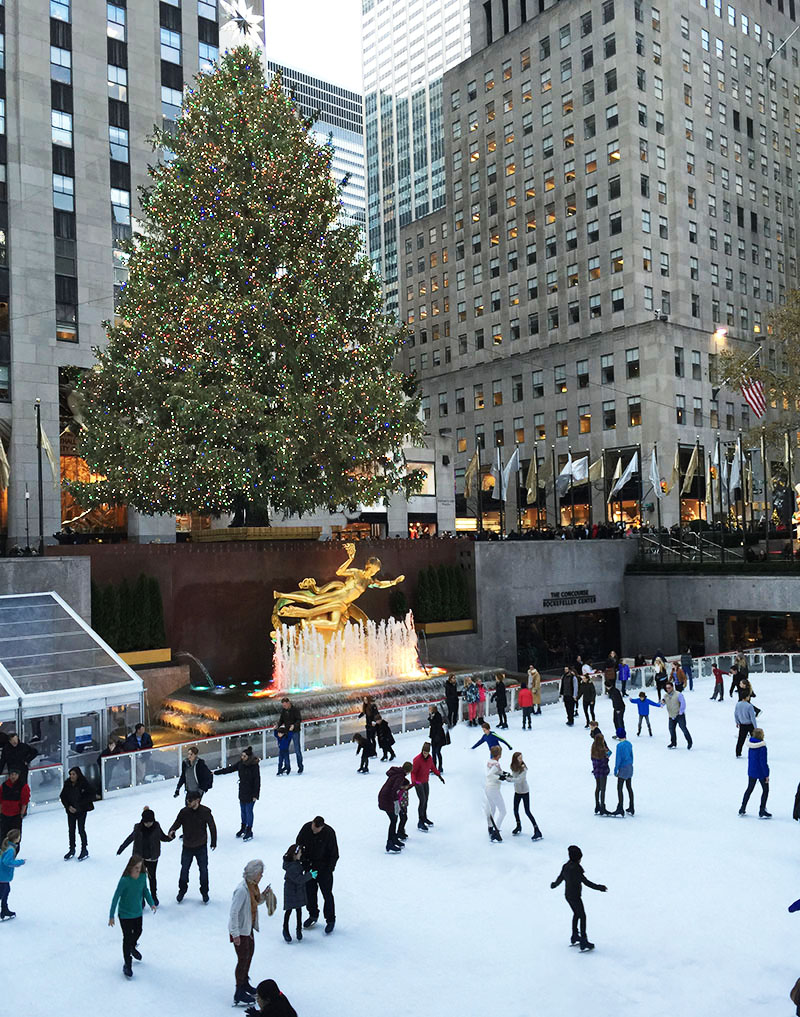 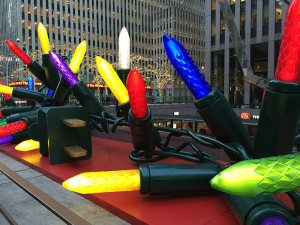 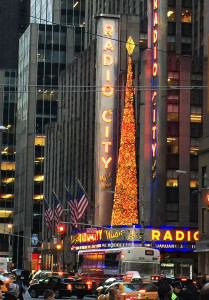 Madge leaves you, dear readers, with a video of the Saks window launch. Madge and Mary delighted in this LED light show on the facade. 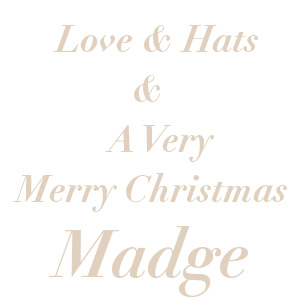