month at the age of 92.  Perfecter of stop-motion model animation, he created two favorite movies from childhood plus a slew of 1950s -60s sc-fi movie classics that are on Madge’s “Greatest Movies Ever” List.

Stop-motion model animation is a tedious process where action figures are posed, moved and photographed frame by frame.  This technique requires precision and lots of patience.  Harryhausen was first inspired by the 1934 tour de force King Kong, which used stop-motion modeling.   There is an amazing sequence in the film where Kong is on the top of the Empire State Building and his fur seems to move in the wind.   The critics raved, but Willis O’Brien, the technical effects creator, later admitted it was a happy accident due to action of the technician’s fingers as the figure of Kong was moved frame by frame.

Harryhausen went to work for O’Brien on Mighty Joe Young, 1949; and then branched out on his own to create the 1953 masterpiece The Beast From 20,000 Fathoms, an amazing dinosaur attacks New York story that set the standard for monster and sc-fi thrillers of the 50s and early 60s.   Other Harryhausen masterworks from that era include: 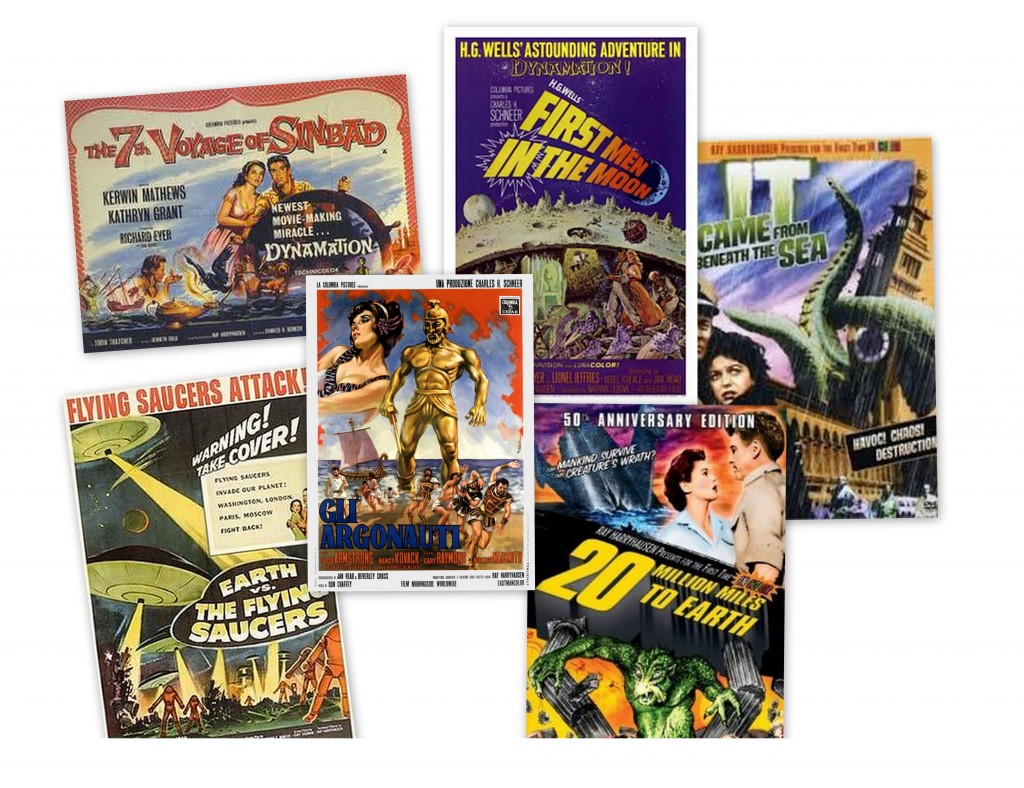 Harryhausen also created the two best children adventure movies EVER; The 7th Voyage of Sinbad, 1958; and Jason and the Argonauts, 1963.  Madge will still sit down and finish either one of these if they happen to be on the tube.  The skeleton army in J and the Argonauts still gives her nightmares.

Of course the men in the crowd will also want Madge to mention One Million Years B.C., 1966, which was Raquel Welch’s coming out party.  This one’s for you Mr. Madge.

His last movie, Clash of the Titans in 1981 didn’t do too well at the box office and it looked like stop motion animation might be gone for good.   Little did the critics know that new generations of movies directors such as Steven Spielberg, George Lucas and Peter Jackson weaned on Harryhausen movies, would be inspired to create all new adventures such as Star Wars, Indiana Jones,  Jurassic Park and Lord of the Rings.   Even the stop-motion model animation process itself has been lovingly resurrected by directors including Tim Burton in his delightful “The Corpse Bride”.

The Ray and Diana Harryhausen Foundation has proclaimed June 16 “Ray Day” in conjunction with a screening of Jason and the Argonauts at the British Film Institute.

So here’s to you Harry, a film effects genius who proved that you don’t need digital effects, 3D or millions of dollars to keep us on the edge of our seats – just a camera, a tripod and an imagination.Madge would add more plaudits, but she is off to score a download of Earth vs The Flying Saucers and pop some corn.

Tags: 20 Million Miles to Earth, Earth vs. Flying Saucers, First Men on the Moon, It Came from Beneath the Sea, Jason and the Argonauts, King Kong, Mighty Joe Young, One Million Years B.C., Raquel Welch, ray Day, Ray Harryhausen, The 7th Voyage of Sinbad, The Beast From 20, The Corpse Bride, Willis O’Brien
By Madge
0
This site uses cookies: Find out more.