The release of Weird Al Yankovic’s album, Mandatory Fun, got me thinking of all the great song parodists through the years.  My love of the genre begins with Spike Jones and his City Slickers.  I blame my mom.

Back in the 1940s when other teenagers were listening to the swinging sounds of big bands such Tommy Dorsey and Harry James or velvet-voiced crooners such as Dick Haymes.  My mom, Millie, was home listening to Spike’s “Der Furher’s Face” and “Ghost Rider’s in the Sky”.   The first, a send up of Hitler and the second, a parody of a very famous hit by Vaughn Monroe featuring a drunk cowboy and a Yiddish sidekick.  Politically correct it wasn’t, hilarious it was and still is.

Jones was the original music video star, famous for his loud plaid suits.  His standard format was to play a song as intended, then repeat, making with the funny sound effects such as honking horns and gargling, plus speeding up the tempo to a fast ragtime beat.   The City Slickers were very talented musicians and Jones sometimes even played it straight.  At those performances he labeled his group Spike Jones and The Other Orchestra.

My personal favorite is one of his biggest hits, the quintessential “Cocktails for Two”. In this video Jones is the one with the never-ending cello.

Spike Jones also is responsible for, what I believe is the best album title – ever.

The late 1950s and early 60s yielded another favorite of my mom, Tom Lehrer.  Lehrer started studying classical piano as a young child and earned a masters degree in mathematics from Harvard.  He went on to academia and, as a mathematics professor, he taught at not only at Harvard, but also at MIT and Wellesley as well.

He served a stint in the U.S. Army from 1955 to 1957, working at the National Security Agency.  A job that probably colored many of his later tunes such as “So Long, Mom (A Song for World War III)” and “Wernher Von Braun”.    He turned his hobby of writing song parodies in to a successful side job.  One of his earliest hits is “Elements”, where he sings the periodic table to the tune of Gilbert and Sullivan’s “Major-General’s Song”.  His albums gained cult status and of course Mr. Madge and I have them all.

In the early 1960s, he was employed as the resident songwriter for the U.S. edition of the British show  That Was The Week That Was, a satirical television show responsible for some of his most famous tunes.

It’s hard for me to pick only one Lehrer favorite. I can get it down to two:  “The Masochism Tango” and “Vatican Rag”. As you can imagine, both created quite a stir in the 60s.

There is a wonderful musical revue of Lehrer’s music called “Tom Foolery”. Originally devised and produced by Cameron Mackintosh.  Catch it if you can.

Haynes and Burns met in 1936 during radio audition in Knoxville, Tennessee when they were both 16 and known as Junior and Dude (pronounced “dood’-ee”).  Supposedly the pair was rechristened Homer (Haynes) and Jethro (Burns) when the program director forgot their nicknames during a 1936 broadcast.  The duo actually teamed up with Spike Jones in a stage show and recorded a 1950s hit “Pal-Yat-Chee”, based on an aria from the opera of the same name (Pagliacci). 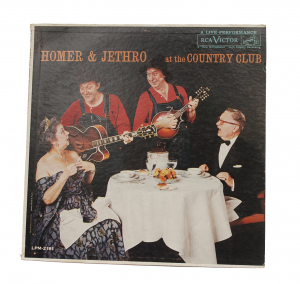 Despite their hillbilly act, both Haynes, on guitar and Burns, on Mandolin, were respected jazz musicians which is evident on the album Madge has for sale in her homegoods shop: Homer and Jethro at the Country Club, recorded live at the Hillwood Country Club in Nashville, Tennessee. Produced by Chet Atkins, with introduction and liner notes by Hee Haw’s Archie Campbell.  The LP is filled with really funny songs based on popular hits of the day. My personal favorite is their lyrics to a medley of “Let Me Go'” and “Fascination”, two particularly schmaltzy tunes from the late 1950s. “. . .She had nine buttons on her nightgown, but she could only Fascinate“. It doesn’t get any better than that.

The 70s brought Dr. Demento and his nationally syndicated radio show. Dr. Demento, real name Barry Hanson, devised an amazing weekly show that ran on Sunday evenings from 10:00 to midnight and introduced a whole new generation to the likes of Spike Jones and Tom Lehrer. Of course my mom and I  were in my room listening and cracking up almost every Sunday night.

The show was a mix of the greatest novelty songs of all time ranging from 1940’s “Shaving Cream” by Benny Bell to the then current “Yellow Snow” by Frank Zappa.  In the early 80s there was also a newcomer climbing the Demento chart, Weird Al with “My Bologna”  (My Sharona).  During the second hour of the show the songs were based on a theme of the week.  At the end was the Funny Five, a count down of listener favorites.  The Funny Five usually didn’t have much suspense since it was almost always the same five songs, including the aforementioned Shaving Cream and Yellow Snow and plus one of our personal favorites “the Cockroach that Ate Cincinnati”.  The show spawned many album compilations and Demented merchandise.  Hanson, I mean Demento is still going strong at 73 with an online version of the show.

The popularity of song parodies and their performers may ebb and flow but the fact that Yankovic’s new album is his highest charting ever gives Madge hope that future generations will discover these uniquely American treasures.