We lost Leonard Nimoy today.  Here’s a piece from the archives in his honor.

It was Wednesday and Madge had the evening all planned out.  First up, a leisurely walk with the dog listening to “All Things Considered” on the IPhone. Then Madge was going to settle in on the couch at home with a bag of popcorn to watch Sharknado 2.  Suddenly it happened, the radio announcement that would rock Madge’s world.  The local reporter read the weekly event calendar.  That night, in less than in 90 minutes, a local comedy group was going to riff on Star Trek trailers at a bar in Midtown Atlanta.  My sainted aunt! Could Madge get there in time? 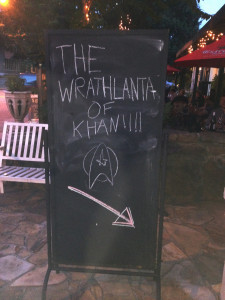 You see Madge carries a deep, dark secret.  Underneath this fashionable facade there’s a Trekkie.  Not the dress-up, convention-attending type mind you, but a Trekkie nonetheless.  Madge has watched every TV episode of every show from the original 1969 series right up to “Enterprise”, UPN’s prequel series starring Scott Bacula.  She’s even seen a few episodes of the 1970s “Star Trek: The Animated Series”.  Not a fan.  Madge is also the proud owner of all the movies, her favorite being “William Shatner Frees Willie” also known as  “Star Trek IV: The Voyage Home” So, after a mad dash back to the house for a shower and quick change, oh, and feed the dog; she was miraculously seated, on time, at the Highland Inn Ballroom, a fab basement venue at the historic midtown hotel, clutching a glass of cheap wine and waiting for the show to begin. 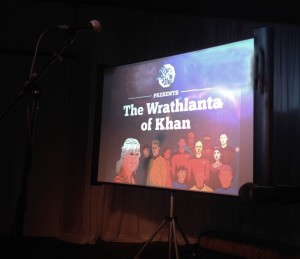 WrathLanta was presented by SceneMissingMagazine.com a satirical website that describes itself as “the literary equivalent of talking through movie trailers”.    Scene Missing hosts a live show each month at the Highland featuring essays, music and stand-up by some of the world’s (or at least Atlanta’s) funniest writers and comics.

Jason Mallory, creator of Scene Missing, was our MC.  He led the group through a Star Trek pledge that started with promising not to talk through the trailers but then somehow assimilated us into the Borg Collective.  Damn, I had dodged that bullet for so long.
First up was the trailer for “Star Trek III, The Search for Spock”, the one where Spock is resurrected after his death in ST II. After the trailer finished, local actress and writer Gina Rickicki beamed up to the stage 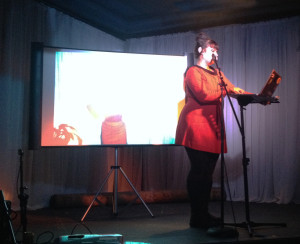 in an outfit that made her look like a sexy Joanne Worley newly graduated from Star Trek officer training.  She launched into a very funny soliloquy on her Love Jones for all things Leonard Nimoy and Spock.  She was even brave enough to show her geeky space camp photos from adolescence. The night was off to a great start. 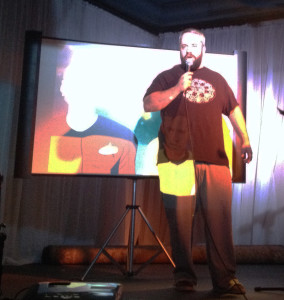 Gallois of William Shatner’s absolutely final, and we really mean it this time, death scene, ever. (Spoiler alert).

Of course WrathAtlanta was legally required to feature “Star Trek II – the Wrath of Khan”, starring the return of Ricardo Montalbán as the most famous villain in Star Trek history.  Ellaree Yeagley has such a great wry sense of humor, yet she never did explain to me how the transporter turned Latin lover Montalbán turned into Brit Benedict Cumberbatch for Khan’s third return, 2013’s “Star Trek Into Darkness”. 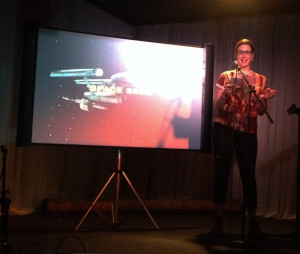 After a brief intermission, i.e. plug-fest for all things Scene Missing and it’s offshoot Write Club, MC Mallory was back begging us to let him skip the trailer to Star Trek – The Motion Picture and go right to the comedy.  The crowd was having none of it.  So after viewing the trailer of what is universally agreed 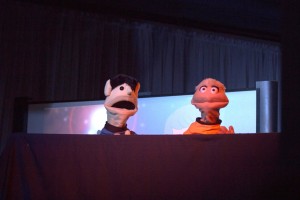 to be the worst ST movie ever, ironically worst was first, Felt Nerdy treated us to a puppet show.  Actually it was more like if Kirk and Spock were in starring in a gender-bending puppet sex comedy.

Just when I thought it couldn’t get any better, Eliot Bronson was up with a musical tribute not only to ‘Star Trek IV – The Voyage Home” (that Free Willy movie) but to the entire 80s generation as well. It was 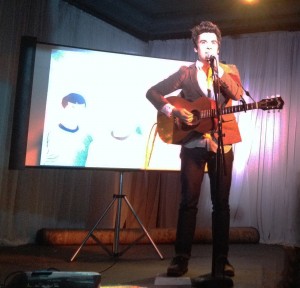 Homeward bound, I wish I was,

Home, were the whales are livin’ silently at sea . . .

Check out his website. He is a marvelous songwriter and singer.

And, a night of Trekiness would not be complete without a paean to “The Trouble With Tribbles” the all-time fan favorite episode from the original television series.  Bobbin Wages, in one of those sexy ST red mini dresses, was a double threat not only showing of her battery operated tribble, yes it vibrates, but giving us snazzy tap dance to the Star Trek theme. 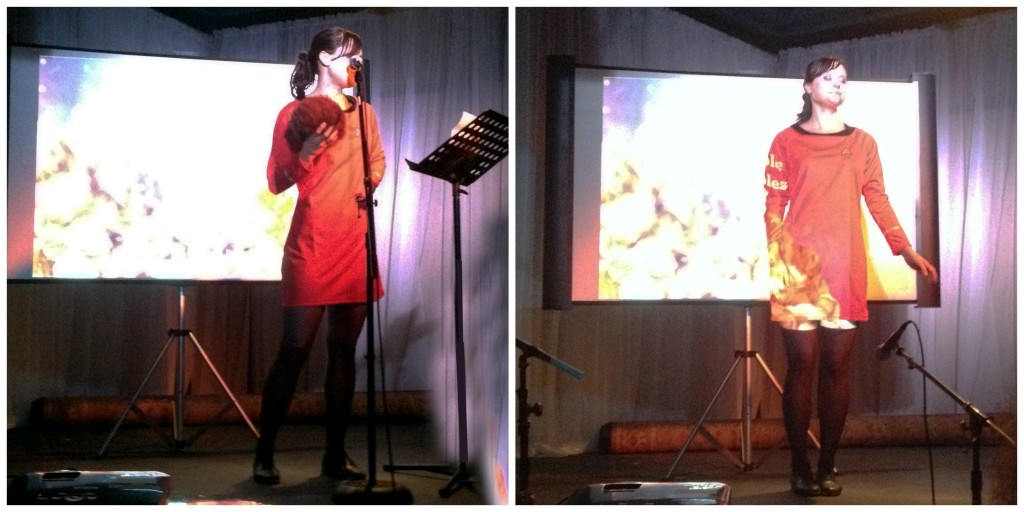 Comic Rob Haze finished the evening with his homage to Star Trek, 2010’s reboot. It was a touching reminiscence about attending ST movies with his entire family when he was a kid.  Of course, as he riffed, back then watching Star Trek at a theater in the ‘hood felt like a private screening. 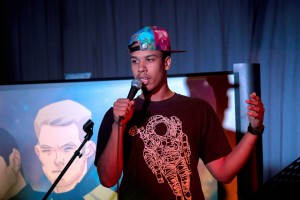 Well, all good things must come to an end.  After an evening well spent, Madge put the Prius in warp drive and headed home.

Check out SceneMissing’s romp at DragonCon 2014 – “I’m Just Along For The Ride: A Weekend At Dragon Con”.