When someone mentions vintage costume jewelry, probably what comes to mind for many of us are the fabulous rhinestone laden pieces of the 1950s.  One of the foremost names in this classic jewelry style was Kramer. 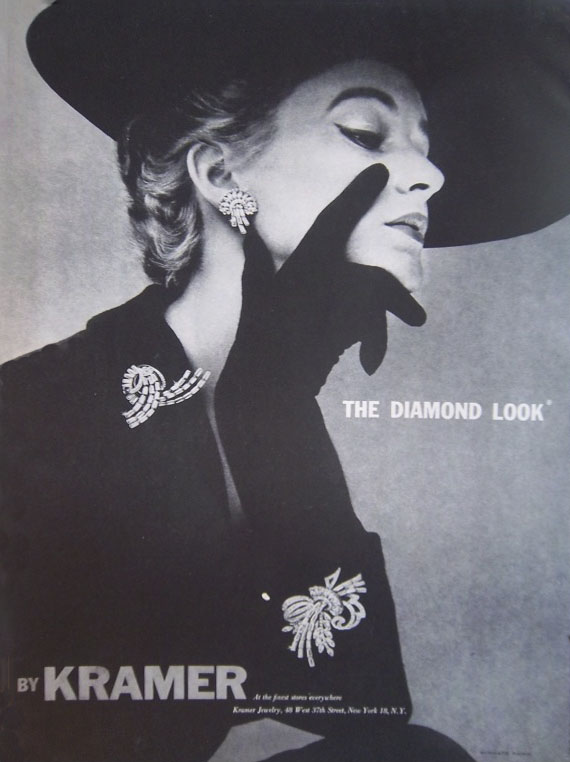 Louis Kramer founded Kramer Jewelry Creations, Inc. in 1943.  His two brothers Harry and Morris arrived on the scene shortly thereafter and ran the business aspects of the company allowing Louis to concentrate on jewelry design   At a time when many costume jewelry manufacturers were located in Providence, Rhode Island, Kramer made their home in New York City.   While they designed all of their pieces, frequently the actual manufacture was jobbed out to other companies such as Delizza & Elster.

The company was best known for their parures (sets) and demi parures of high-quality rhinestones, usually Austrian.  Other materials such as art glass were sometimes incorporated into the designs.  They also designed jewelry for other companies, most notably Dior in the 1950s and 60s and Geoffrey Beene in the 1970s.

In addition to their classic pieces, another style associated with Kramer were their fabulous floral brooches in rhinestones and/or enamel.

In the construction of the their jewelry, the rhinestones were usually prong-set.  The backs of earlier pieces were either plated with gold or rhodium which is a shiny silver-colored metal.   Later pieces in the 60s and 70s had textured backs rather than smooth.

There are several general rules for dating costume jewelry that can be applied to Kramer and many other companies.  Prior to 1955 jewelry makers were not able to use copyright law to protect their designs.  So any piece marked with a © is later than 1955. Sometimes jewelry companies placed design patents on their pieces prior to that date as copy protection.  These numbers are searchable online and show the date the patent was granted which will give you the earliest date a piece might be made. Design patent numbers start with a D.  Sometimes the patent number is for a mechanism, such as an earring back, rather than the design.  These are called utility patents and these numbers are also searchable.  Bear in mind, however, when searching a utility patent, companies usually used mechanisms for longer periods of time.   Metal was rationed during WWII so costume jewelry companies used sterling silver instead and those pieces are marked as such during that time period.

When dating Kramer Jewelry it is helpful to know the marks used by the company.  These marks include Kramer, Kramer of NY, and Kramer of New York.  Rarer marks include Kramer Austria, Kramer Sterling, the Diamond Look and the Golden Look.  Kramer also made a second jewelry line in the 1960s called Amourelle, designed by Frank Hess who came to the company from Miriam Haskell. The Amourelle pieces are very reminiscent of Haskell pieces of the same vintage.

Dior pieces are usually marked Christian Dior by Kramer.  You may also see Dior by Kramer or Kramer for Dior.  The Beene pieces are marked in an oval with Kramer© in the middle of Geoffrey Beene.

Unfortunately many of the companies pieces in the 1950s and 60s were unmarked and were only identified with a paper hangtag, now long gone.

Some of the company’s marks that are helpful in dating their pieces:

Kramer and Kramer Patent Pending  – prior to 1955.

Costume Jewelry Collectors International has a jewelry marks reference guide.  Here are some examples of Kramer marks from the site.

Like many other American costume jewelry companies, Kramer found it increasingly hard to compete with cheaper imports and the company closed at some point in 1979 or 1980.   If you are interested in collecting costume jewelry Kramer is a good place to start as it fairly easy to find and is of such high quality.   There is so much variety in Kramer jewelry you are sure to find something to your individual taste.  If you find one of the rarer marks such as Geoffrey Beene sure to snatch it up before Madge does.